Hello there! Okay so, it’s been roughly 4 months since my last update and oh how my little homie has grown. He has surprised me in many ways over the last four months, I recall when he had to have his set of injections [inserts pause] ok so, the good hospital folks recommend that new borns must have a series of injections within 3 months, thing is – these injections alone would make ME cry, let alone Noah. So, we’re sat, ready for his first set, did this child even cry? Did he even scream? Looking at me like “Pfft, what’s next?” These, like many moments in this now 6 month period has me lost for words, [on with the post.]

So, Noah is growing. From a stage where he was still, he now sways. From the sways to rolling on his stomach, his strength has dramatically increased! He is now able to pull his body with one arm (introduction to crawling) using his knee as leverage to push and if he wants to go back, he simply does this weird 180 roll to where he was to begin with, I’m surprised he doesn’t get dizzy. In Noah’s pursuit to crawl, he has now managed to place his knees and hands firmly on the floor however, that’s where he becomes stuck and starts to rock back and forth almost like he forgot how to move in the first place, so at present, this is his challenge. On our side, Nat has become creative with his Solids. A Joint decision to “No Baby Rice” was made which now has us thinking outside the box, swede, aubergines, potato, sweet potatoes, spinach, broccoli, carrots and many more gets meshed in various ways, the dude has a menu!

His curiosity has grown. Whenever we are out, all you’ll see is his head spinning left/right looking at people, hearing sounds. Life at home is quiet and calm, so when he’s around loudness he often cries first and soon adapts. There’s this continual relationship between him and lights, be it sparkly, colours etc he loves them and another thing this boy loves is FOOD! What child doesn’t right? He now holds his bottle, takes whatever snacks out of our hands because not only does he want to see what we are feeding him, he proceeds to hold it, and feed himself! His sense of being choosy is setting in. He now turns away if he is not so sure about you, and since he can’t talk yet, we practice simple sign techniques like “up” and he can now recognise his name.

The Noah Show – It deserves a split title because though we are nowhere near the so called “Terrible Two’s,” we are getting a taster of what that might be like right now, 6 month’s in. This boy is slightly spoilt already, and at times, cheeky! The cheek! The grump in him has found voice and maaaaan does he get moany! You cannot sit Noah down at times without him kicking off for No reason, you cannot eat around Noah without him wanting some, does he acknowledge the fact that he just ate? No! Does he then pull your tray with his new strength – Yes! Has he ruined many a date nights? YES! Rude!

All of this love, and Bite

A fitting title for my post today as I feel that is my current state of mind. The first part is pretty explanatory, but the Bite! Is interesting, so, I want to explore that in three parts:

So, I’m going to do my best to explain this and hopefully make sense in doing so, please let me know in the comments if it does lol.
Noah had his first Christmas this year, I think back to last year, dude was nowhere here yet and now, I see him crawling, playing with his cousins. I think back years before that and me on my own at home whilst mum was at work. Me, jealous of all of my friends with their families, purposely saying no to the invites, they were not horrible people, but they were not My family and even if I attended, at some point I would leave and return to an empty home. I love Mum for the times she worked, that couldn’t change for the financial times she faced but I couldn’t help feeling the way I did. Fast forward to 2014 and this is that feeling I longed for, that external Bite, that pinch, silent goose pimples that felt good. I often post pictures/videos of me and him fooling around like, Noah thinks I am the funniest person around (well, Nat is funny as well but errr..) He wakes with a smile, and the peace in him whilst he sleeps. His two bottom teeth have come through and he’s chewing on everything he gets his hands on including MY LAPTOP CHARGER! Again, RUDE!

Noah was in and out of A&E four roughly four days in December, he actually was admitted in for a day and a bit. The harsh reality when you wake, and see your child not breathing right, his lips blue and body burning, burning so much that you readjust your arm.
With bulky vomit whenever he was given medicine, he ended up vomiting bile because there was nothing left in his body, this was deep! He was soon admitted in. Ten doctors surrounded him trying to diagnose what was wrong. The results came back being the flu and an upper respiratory viral infection. What caused it? Pfft! Could be people, could be surroundings. Scared was not the word. These internal pinches that hurt, that (as parents) make you feel useless, that will evolve as he grows. I wrote a poem within that period that explores the reality of me not being on time to fix things, but rather, I’m late and catching up to what has occurred, how do I change that? I can’t. I just have to be prepared, and be there.

All of this love, and Bite… I can’t have one without the other.

Did it make sense?

Here’s to a wonderful 2014 and to my little man entering this world! 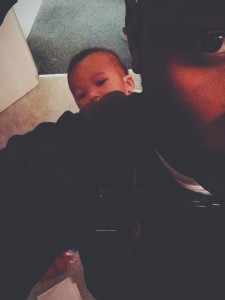