I have no shame in saying, we worked hard for our first child. But it was a necessary journey. There was so much growth we had to do. We had to cleanse ourselves both physically and spiritually. We had to clear a way, so that our child could enter this world.

Ultimately I think we did a good job, as Okai (our firstborn) decided he would turn up two months ahead of schedule.

Okai weighed in at just 4lbs, and spent the first month of his life in the Neo-natel Intensive Care Unit of Queens Hospital Romford. He endured three bouts of jaundice and suffers from G6PD (not that it affects him in anyway). Everyday my wife and I traveled back and forth from the hospital, getting in sleep where we could. To this day I am in total admiration of her determination to breast feed him so quickly. I was in awe of how she became a “mother” so quickly. All I could do was look at him. I was even to scared to touch him. I’d open up the incubator, stroke his little arm, close it and then sing to him. However, despite the little big heads rough start, it was obvious from early, that this kid had spirit.

Okaija (our second born) was a surprise. By now, we were enjoying being parents, and had accepted that we were that couple that just didn’t conceive “easily”…..so when we decided we were ready for number two, we would once again have to adopt a military style operation in order to get those two lines. Not so. All it took was one night out, listening to Old School Garage by Matt Jamm Lamont, followed by an hour in Bow McDonalds pestering two of our closest friends on when they were going to have kids of their own. Irony. Tensions were high during this pregnancy. All we wanted, was a stress free pregnancy that went to term. The universe had other ideas. Physical illness and emotional stress ensued. By the time my wife was actually in labour, I can honestly say that emotionally I was drained. The fact that she had to have an emergency cesarean due to the cord being wrapped around the little scamps neck, did my blood pressure no favours.

But we got through it. And it was surreal. We now had two kids. Not so long ago, we weren’t even sure we would have one. Sometimes, of an evening we sit there and just watch them. I think that neither of us can still quite believe our blessings.

So here I am. Husband to Nana, and Father to Okai & Okaija. The growth in the last two years has been exponential. I’m learning more about myself everyday. Who knew that I’d prefer to change a dirty nappy than the tedious task of feeding a child!

I am a more grateful human being. I have the best reasons in the world to be better. Yes I get frustrated when I think about all that I haven’t achieved – but I’m grounded when I think about all that I have achieved. I worry slightly less about how much money is (not) in my bank account and worry more about getting quality time with my family. I’ve realised the importance of following my passion in order for me to be at peace with myself. I realise too, that this at times will require some sacrifices.

I’m not a perfect dad, how could I be? But every morning when I wake up, I operate from a place of love and then try to apply logic. I’m hoping that these two things enable me to be the best version of me possible. Its nothing less than they deserve. 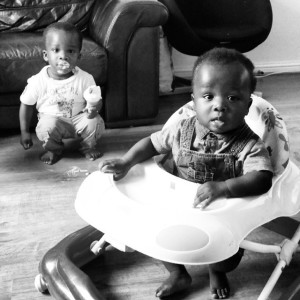 2 thoughts on “And then there were four….”