I’ll admit it; When I found out we were having another girl, I was heartbroken. So heartbroken, in fact, that I called one of my best friends and cried on the phone with for nearly an hour, making him endure the torrent of my emotions. I was a shaken snow globe of grief, thankfulness, self pity, guilt, and to some degree, even hopelessness. 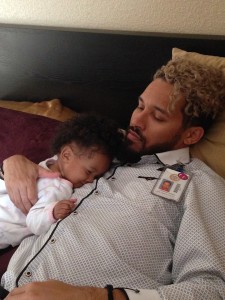 I know, this is not my usual style of post. This is much more real, raw, and vulnerable than I would typically be, but trust me when I say, “it’s not without purpose.”

My friend, the godfather of my children was in a tough spot between encouraging me, and rebuking me, while being chipped away at and having his heart strings pulled by the complexities of my emotional state; I simply couldn’t cope. My wife Alison was sick, placed on bed rest, and it left me to care for her, and our daughter Alexzandria. It sounds typical, but I hate to see my wife in that state, and now I’m keeping our daughter out of the bedroom, so my wife can get her rest…but I don’t want my wife to feel abandoned, or for my daughter to feel like I’m keeping her from her mother. To top it off, we were having a girl, when I had been praying, hoping, and planning for a boy for nearly 7 years. I was an emotional wreck.

I grew bitter and defeated at my wife’s sickness, wishing I could take her place, so she could get her strength and fervor for life back,all while excitement yet grew of the unknown which was to come. It took me 4 days to find me again and passionately  accept that we were having another girl (Judge away. I know that’s not what dads are supposed to say, but it’s true.). Alison remained sick during the entire pregnancy, just like she did with Zandri (Alexzandria), but I held on to my hope that she would be fine, and she was. Before long, our beautiful baby girl, Zalina, was here. Unfortunately, she was born with jaundice, and it wasn’t what I expected.

We had heard about babies with jaundice before, and everyone always spoke like it was no big deal, like it was something minor, so naturally, that was how we thought of it. This of course was before we were told that her jaundice was getting worse, in spite of treatments. I wasn’t prepared for hearing my child scream in pain at the doctors drawing her blood 6 times a day. I thought I was heartbroken when we found out we were having a girl…but that was nothing. I was devastated at them telling me that the jaundice was getting out of control, and that our baby was going to be hospitalized at the children’s hospital if they couldn’t do anything. My wife was in shambles, having regular breakdowns, and it only made me grow worse emotionally. Doctors just kept telling us to feed the baby, that it would help to let her breast feed as often as she liked, but her bilirubin levels spiked. I couldn’t help but ask God why our babies couldn’t just be easy, couldn’t just be born healthy, and I was reminded of the words of a mother I once spoke to. She simply told me, “Linwood, those miracle babies will cost you something, but no matter what, don’t you lose faith in God. He is the one in control!” That had proven true…by doctors reports, we weren’t even supposed to be able to conceive, yet God was in control.

Our baby girl had to lay under the UV lights with no clothes on and her eyes completely covered both day and night, in a cold hospital room. We could only hold her during feedings, and to hear her cry, without the ability to comfort her, or even keep her warm ravished my heart even more. You see, I’m a very sensitive man. I cry for nearly everything: TV commercials, other people’s struggles, people’s accomplishments, the end of Madagascar 3… everything! ( and don’t even get me started on “Marley and Me,” I will never watch that again, ever.) Of all the things I cry about though, one is my inability to help, to FIX… fixing is my job! I couldn’t fix this one though, I had to allow my baby to cry for me, knowing that my comfort, my taking her out to hold her, would only make her WORSE. THAT is heartbreaking as a father.

We began to start feeding Zalina formula, and feeding her constantly, but my stubborn child would only take what she wanted and would tightly purse her lips as if to say, “that’s enough, I’m not taking anymore.” How were we going to get her levels down like that!? We literally began putting a bottle in her mouth overtime she made the mistake of opening it, we stuffed her, which sounds bad, but you know what? It worked. Her bilirubin levels dropped, and we could safely take her home, without fear of her being seriously hospitalized. 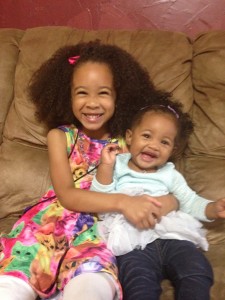 It has been a year since then, and it’s been an interesting ride. Zalina is my partner in crime, I completely adore her, and I can’t believe I was ever so emotional over her not being a boy. Other people look at her and say, “What a beautiful baby!” but when I look at her, all I see is God’s unending grace. Zalina is VERY different from her sister, she’s antisocial, and selective, she’s cautious, particular and serious, and she knows precisely what she wants, as well as who she wants it from! She is such an easy baby though, she’s always so happy, and hardly ever cries (with people she is fond of anyway, remember, she’s anti social and selective). Alexzandria LOVES being a big sister, and she is a great one at that, and for some reason, Zalina will tolerate (and even enjoy) so much more from Alexzandria than she will from ANYONE else, my wife and myself included. Our family has been abundantly blessed time and time again, and I simply couldn’t be more thankful!

Zalina is our last child, I got a vasectomy in March. Gone are my dreams of us having a boy, and I’m okay with that. I was wanting to have someone to carry on my name, as though that alone was my legacy… but I build my legacy daily, in the joy and the love I possess for our children. I pray that I march in excellence, knowing that they are on my trail. 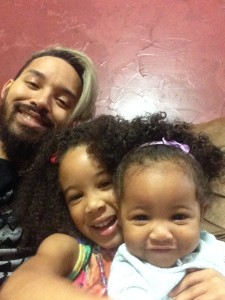 I’ll be honest and tell you that this past year has been harder than I could have imagined, I’ve battled with depression numerous times. It’s why I hadn’t posted; my headspace was so negative and consumed. Sometimes, as fathers, we have to take a step back, prune away everything that doesn’t matter, re-find our balance as life shifts with tribulation, and focus on what REALLY matters. That’s what I’ve been doing as of late. As a parent, there will be times where you are heartbroken, lost, at a loss for words, frustrated, off balanced, and knocked on your back. Don’t let those be the moments that define you, be defined by the strength with which you got back up! Be defined by being the father who sees his own wrong and isn’t too prideful to correct his own actions. Be defined by your ability to somehow hold it together when your inability seems to consume you. The hardest part about parenting isn’t the expense, it isn’t the work or the lack of sleep; It’s the raging sea of emotions having to be navigated by and inexperienced captain who is gaining his sea legs by experience. Still his crew looks to him for strength, and while sometimes fearful, he stays determined to lead so he and his crew make it through yet another storm. THAT is fatherhood. It’s a gloriously beautiful, yet complex journey, feared by many. It’s a faith shaking experience that somehow both shows you your weakness and develops your strength. It will melt your heart, break your heart, and at times (to your children) make you seem heartless. It’s full of tough decisions…some of which will keep you up at night, and as bad as it sounds… it is one of the best things that has ever happened to me. I simply would not trade this for the world.

5 thoughts on “Heartbroken, and full of purpose.”